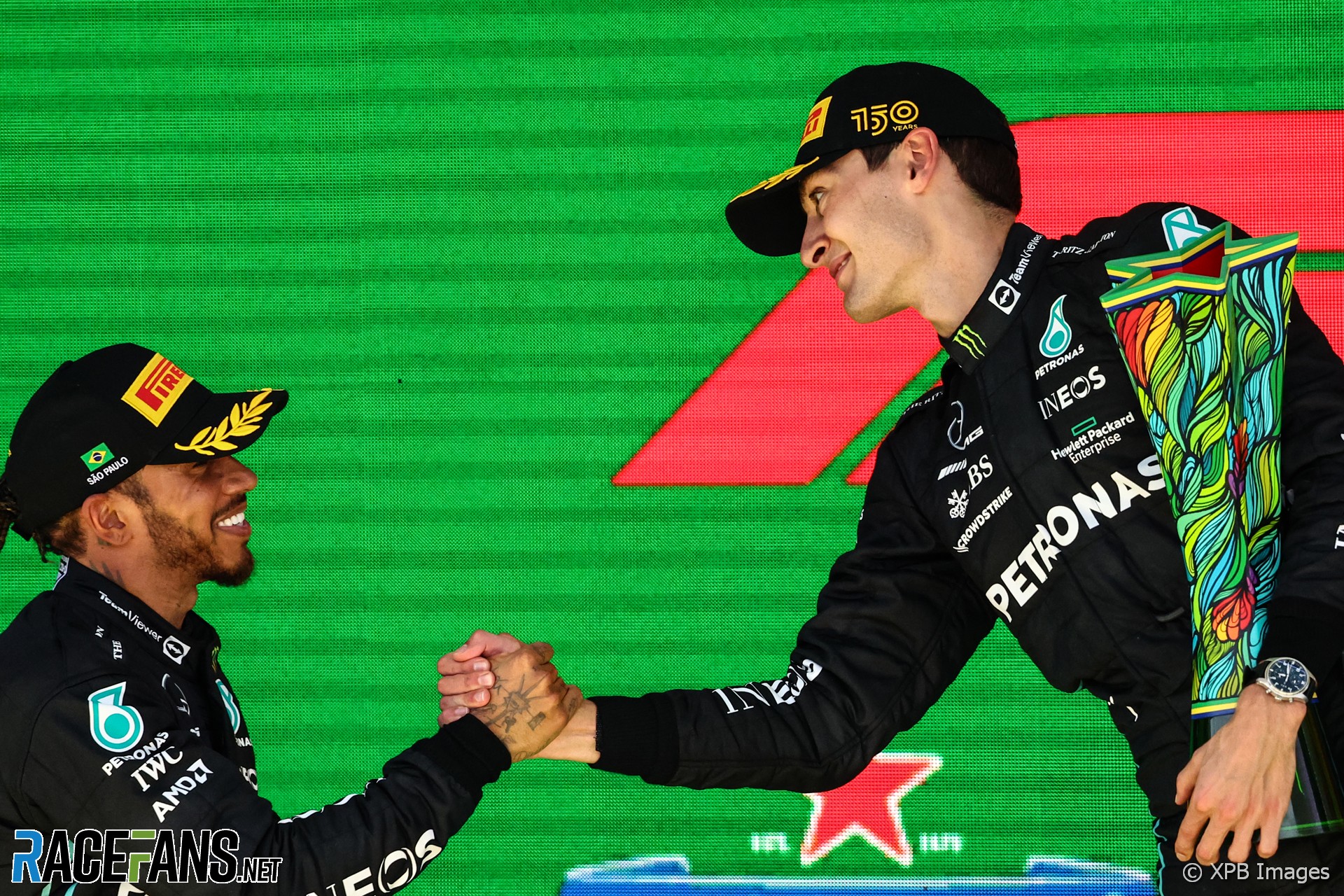 Last weekend Lewis Hamilton ended a Formula 1 season without winning a race for the first time in his career.

However his Mercedes team did win during 2022, and his arch rival Max Verstappen believes Hamilton missed one opportunity to win this season.

At the opening race in Bahrain, Hamilton’s Mercedes lost over a second per lap to the race-leading Ferrari and Red Bull. It was clear the W13 wasn’t going to win races any time soon.

But by the mid-point of the season the team were starting to lead grands prix, and on a weekend where the track and conditions suited them, and the stars aligned in their favour, victories finally started to seem possible.

So how many chances to win a race did Hamilton have before the end of the season? And how many of those might he realistically have converted?

It took until the 10th race of the season for Hamilton to finally lead a lap in 2022. Fittingly, this came on home ground at Silverstone.

When Verstappen dropped out of contention for victory after striking debris, it seemed Charles Leclerc was on course to win. But a Safety Car period was his undoing: while the Ferrari stayed out on worn rubber, Hamilton and others seized the chance to fit fresh soft tyres.

It all kicked off at the restart, where Hamilton briefly passed Leclerc and Sergio Perez in a stunning move at Club. But Carlos Sainz Jnr was already on his way to victory by then and Hamilton, who bagged third, never really looked like beating him.

Mercedes eventually found they were able to make the W13 work well on high-downforce circuits. This boded well for the Hungaroring, always a strong venue for Hamilton.

The cards seemed to fall in their favour in qualifying when Verstappen fluffed his first run in Q3, then suffered a power unit problem. But Hamilton, who only had used tyres for his first run, suffered a DRS problem on the second, and gave up the lap when he might have bettered his eventual seventh on the grid by pressing on. Team mate George Russell, meanwhile, gave Mercedes their first pole position of the season.

In the race Hamilton was quick enough to catch and pass his team mate to finish second. But Verstappen, who started three places behind Hamilton, got ahead of both on his way to victory. Had Hamilton started closer to the front one way or another, he would have stood a better chance of out-running Verstappen, who lost time with a spin, though it was far from a certain win lost.

Verstappen’s enormous pace advantage was such that he was widely tipped to win despite lining up 14th on the grid. But Hamilton briefly put himself in a strong position before compromising his race and aiding the Red Bull driver’s as a result.

Hamilton took fourth on the grid and immediately passed a slow-starting Perez. He was poised to see off Fernando Alonso for second place at Les Combes when he left the Alpine driver too little room, triggering a collision which put the Mercedes out of the race.

It also triggered a Safety Car period which helped Verstappen close on the rest of the field. Had Hamilton avoided that clash with Alonso he’d have been second at the end of lap one with Verstappen further back. Would that have been enough to put Hamilton on course for that elusive win? Given how strong Red Bull were in Belgium, it’s unlikely.

Back at another high-downforce track, Mercedes were in the hunt again. Hamilton, who started fourth after his final Q3 lap was compromised by Perez spinning, ran a single-stop strategy on harder rubber while leader Verstappen needed to make a second visit to the pits.

A series of problems for Yuki Tsunoda handed Verstappen the opportunity to make his stop during a Virtual Safety Car period. Without that, Mercedes reckoned Verstappen would have caught Hamilton for the lead with six laps to go, which would have made for a thrilling finish.

There was plenty of drama all the same, as a Safety Car period with 16 laps remaining prompted Verstappen to pit again. At first Mercedes kept both their cars out, Hamilton leading, but Russell then decided to pit for fresh rubber as well. Hamilton therefore led the restart on old rubber and was always going to be vulnerable to Verstappen, a situation which was not helped when the Mercedes driver left an engine mode change too late.

Had Mercedes left both cars ahead of the Red Bull on their older rubber, would Hamilton have been able to ‘switch on’ his medium tyres quickly enough to repel Verstappen once he passed Russell? It’s doubtful – the Tsunoda VSC earlier on was where Hamilton lost his best chance to win this one.

If the Singapore Grand Prix was winnable, Hamilton’s failure to do so was entirely on himself. Saturday went well: while Verstappen ran out of fuel in Q3 and missed pole position, Hamilton claimed third, a whisker behind Leclerc and Perez.

However on a wet Sunday night Hamilton lost a position to Sainz at the start, which cost him significant time to the leaders over the opening stint. As he pressured the Ferrari he skidded into a barrier at turn seven, ending any chance of victory.

Had he not done that, Hamilton would still have had to find a way past two Ferraris and a Red Bull to win. Arguably it was in qualifying where this one slipped away from him: He needed just six-hundredths of a second more for pole position. Perhaps more significantly, he was only 0.032s off second on the grid, from where Perez launched into the lead and claimed the win.

Mercedes’ final upgrade of 2022 was only applied in part at the Circuit of the Americas due to legality concerns over a new front wing. But it proved just the ticket, and Hamilton took third on the grid.

He ran second after Russell took Sainz out at turn one. Keeping pressure on Verstappen, Hamilton was the first of the pair to pit both times, but unlike his rival there was no fresh set of medium tyres ready for him at his final stop.

Red Bull fumbled Verstappen’s stop badly, however, and Hamilton had a six-second lead over his rival with 28 laps to go. It wasn’t enough: Verstappen picked his way past Leclerc and Sebastian Vettel before cruising past the Mercedes in the DRS zone to win.

Would Hamilton have stood a better chance of winning on the medium rubber? Ferrari team principal Mattia Binotto believed so – and he said much the same about their next defeat a week later.

By round 20 of the championship Mercedes had their final upgrade on the car in full, including a reshaped front wing which made the W13 a genuine contender on high downforce tracks like the Autodromo Hermanos Rodriguez.

Hamilton lost his first lap time in Q3 due to a track limits violation, so had to rein it in for his final run. Russell pipped him to second on the grid alongside pole-winner Verstappen by five-thousandths of a second.

But the real damage was done on race day. When the tyre blankets were removed on the grid, medium compound tyres were revealed on the Mercedes, while Red Bull and Ferrari had opted for softs, believing they were durable enough in conjunction with the medium tyre compound to complete the race with a single stop.

They were right. Once Verstappen made his sole pit stop for the medium tyre compound, and the Mercedes pair switched to hards, the Red Bull driver stretched his legs and scored a comfortable win. Afterwards Mercedes team principal Toto Wolff admitted that in hindsight, “if we were to restart the race, maybe we would choose a different tyre”.

Mercedes finally scored their first – and only – win of 2022 at Interlagos. But the win went not to their seven-times champion but his team mate, Russell claiming his first ever grand prix victory.

On the sprint race weekend, a wet qualifying session on Friday set things in motion. Russell bagged third on the grid in Q3 as rain started to fall, then spun off, triggering a red flag which secured him a starting position five places ahead of Hamilton.

For once, Red Bull didn’t satisfactorily nail the set-up on their RB18, and Verstappen encountered tyre degradation despite starting Saturday’s sprint race on the medium tyre compound. Both Mercedes passed him, Russell winning and Hamilton completing a silver sweep of the front row.

Hamilton and Verstappen tangled early in the grand prix itself, earning the Red Bull driver a penalty and allowing Russell to build a useful lead. Although Hamilton appeared to have slightly better pace he was called in for an early second pit stop, which ensured he banked second place ahead of Perez, which wasted some of that advantage. A late Safety Car period left him chasing Russell to the flag on slightly older tyres.

Qualifying behind Russell didn’t help Hamilton’s cause, but did the collision with Verstappen prevent him from winning, and should he have avoided it? Predictably, Verstappen believed so.

“I went around the outside and I immediately felt he was not going to leave space,” he said afterwards. “So I just went for it, he didn’t leave me space, I knew we were going to get together. It cost him the race win.”

Whether that was true or not, it was Hamilton’s last best chance to win before 2023, by which time he will have gone more than a year without taking a victory.

Could Hamilton have won a race in 2022? If so which? Have your say in the comments.

54 comments on “How many victory chances did Hamilton have in his first winless F1 season?”