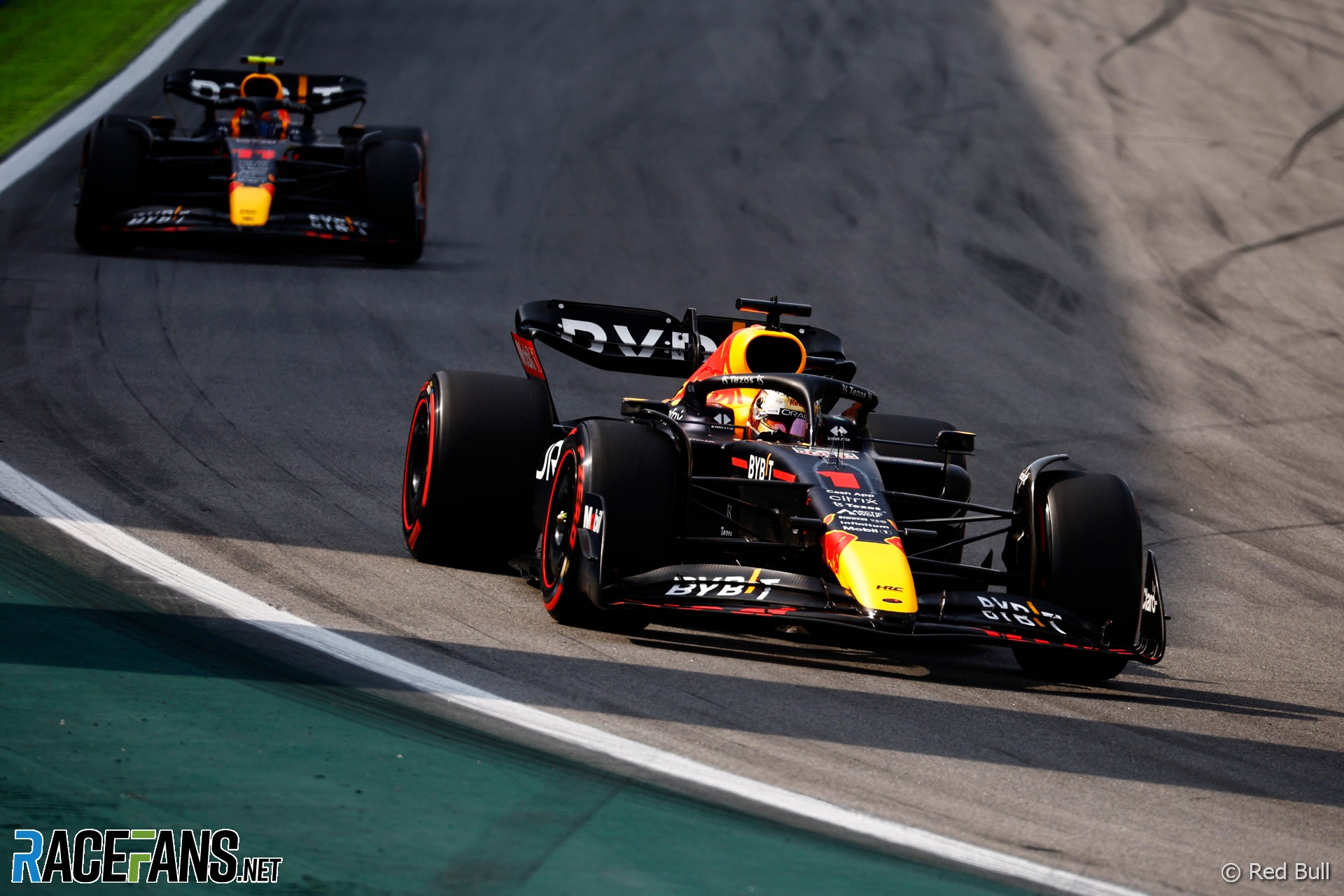 The Brazilian Grand Prix was disappointing enough for Red Bull to begin with – then their two drivers fell out over a team orders dispute.

Sergio Perez was deeply unimpressed at his team mate’s refusal to let him by into sixth place at the end of the race. Perez is seeking to claim second in the championship and secure the first one-two in the points standings for the team in its history.

His cause wasn’t helped when Max Verstappen ignored a series of calls to let Perez by over the final laps. Verstappen had been waved past his team mate in an effort to overtake Fernando Alonso, but was unable to pass the Alpine before the end of the race.

Verstappen was no happier with the situation than his team mate, telling his race engineer Gianpiero Lambiase he had previously explained why he was unwilling to make way for his team mate on-track. However as the team’s radio messages showed, Perez had been given assurances Verstappen would relinquish the position.

The situation would not have arisen had it not been for a late Safety Car triggered by Lando Norris’ retirement. Prior to that, on lap 51, Perez was sitting in fourth place, over 40 seconds ahead of ninth-placed Verstappen, who had been delayed by a collision with Lewis Hamilton earlier in the race.

Norris’ retirement initially triggered a Virtual Safety Car period. Perez gained a position from this, as second-placed Carlos Sainz Jnr took the opportunity to pit, and rejoined the track behind the Red Bull on fresh tyres.

The marshals encountered difficulty removing the stricken McLaren and race control decided a full Safety Car period was required. This closed up the field.

Perez now lay in third but was running on the unfavoured medium tyre compound and knew he was unlikely to have the pace to challenge the two Mercedes ahead. The soft-shod Ferraris behind were a concern: Not just Sainz, but Leclerc too, who like Verstappen had regained a huge amount of time thanks to the Safety Car and had only Valtteri Bottas between him and his team mate.

Behind Leclerc came Sebastian Vettel, the two Alpines and Verstappen.

The restart of the race was delayed as race control attempted to wave the lapped cars through and onto the lead lap. However due to an oversight only the two Williams drivers were let through. Yuki Tsunoda, who was also a lap down, was left where he was, causing some confusion.

When the race finally restarted the chatter on the radios died down for several laps. While Verstappen passed the likes of Vettel and Esteban Ocon ahead, Perez was unable to repel the Ferraris and even Fernando Alonso, who had taken the opportunity to fit a set of soft tyres during the Safety Car period.

After Alonso moved into fifth ahead of Perez, Red Bull decided to see if Verstappen was quick enough to chase down the Alpine.

Perez was told to let Verstappen past on the understanding that if his team mate could not get past Alonso, he would be given the position back. This detail was not stated on Verstappen’s radio: He was told only to try to attack Alonso.

Verstappen closed on Alonso but was unable to pass him before the final lap.

On the last lap Verstappen was told that if he wasn’t able to pass Alonso by the final corner he should let Perez past again. He didn’t do so, and was told repeatedly as he headed towards the finishing line to back off.

Verstappen took the chequered flag four seconds ahead of Perez, who was bemused as to why he hadn’t been given his place back.