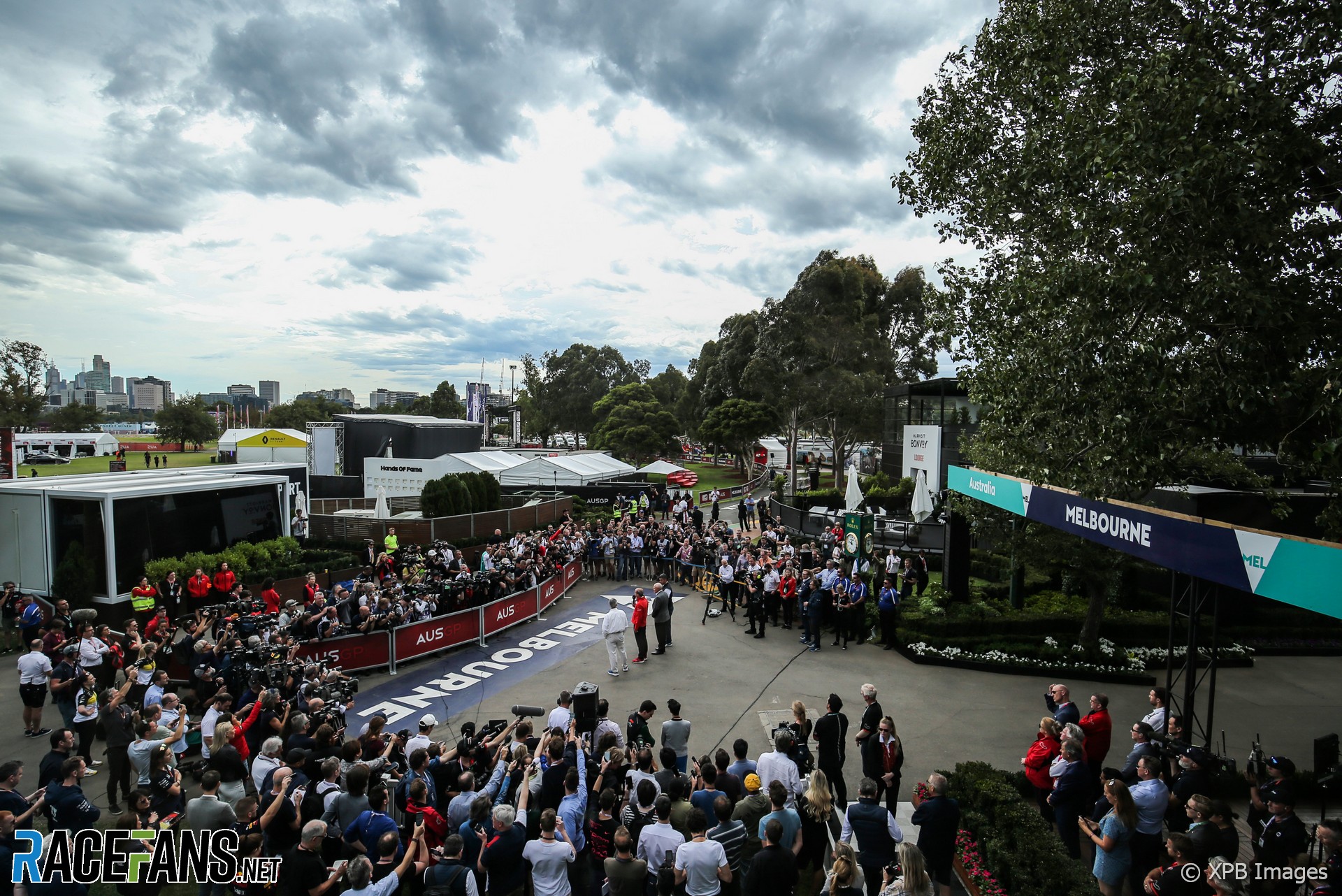 It became clear during 2020 pre-season testing in Barcelona that a strain of the contagious respiratory virus known as SARS-CoV-2 was likely to impact seriously on Formula 1. Spain was deemed a hotspot – as was Italy – and prevailing talk steadily diverted from front wings and tyre degradation to lockdowns and quarantines.

Although the world in general was thrown into turmoil – borders were progressively shut, travel increasingly banned and businesses forced into shutdowns – F1 inexplicably pressed ahead and travelled to Melbourne, only for a positive case of what had by them become known as Covid-19 to cause first the Australian Grand Prix, then a swathe of subsequent rounds, to be officially cancelled.

F1 teams went into crisis mode, with the FIA immediately enforced factory shutdowns. During this period the sport’s processes were streamlined, plans hatched, policies and regulations rewritten, freezes introduced, F1’s overhaul of its technical rules delayed a year and a dynamic calendar constructed, one that ultimately delivered 17 races – five down from a scheduled 22 rounds – almost all of which were held behind closed doors.

True, there were a number of late reschedules and last-minute adaptations along the way, but F1 knuckled down superbly and ultimately salvaged its season, as Chloe Targett-Adams, F1’s director of race promotion, explained to RaceFans. This in the face of calls from F1’s previous masters Bernie Ecclestone and (ex-FIA president) Max Mosley to scrap the year totally to provide an element of certainty.

Still, it was obvious the sport would take massive financial hits, although how big an impact Covid had individually and collectively could only be guessed at – even with an informed analysis – as there simply were too many variables. Who knew, for example, exactly what terms each race promoter was on – paid, free or paying – and had precise knowledge of which sponsors had rescheduled their deals, and by how much?

All would only become clear once full 2020 financial results were available, and here the British system is indispensable – the financial results of every one of the seven UK-registered entity are available. However, teams had minimal income during 2020’s first two quarters, so all hinged on the third and fourth quarters.

While the other jurisdictions in which the other three F1 teams are based – currently Switzerland (one) and Italy (two) – do not offer easily accessible reporting structures the overall effect on the respective teams is similar to comparable operations in the UK given that all were treated as equitably as possible under Covid.

Thus, local economic and social factors aside, the effects of Covid on Sauber, the Swiss team with an Alfa Romeo-branded F1 operation, are assumed to all intents similar to those on UK-based Williams, when expressed as percentages. That said, the various independent teams largely had a rougher ride as most only received the proportional slices of income, while the likes of Ferrari, Mercedes, Red Bull, McLaren and Williams received their various bonuses for the final time before F1’s new prize money structure arrived.

Note: In the analysis below F1’s two reporting currencies are used where applicable because percentage variances are the key indicators, not actual currency values as Sterling rates varied due to the effects of Brexit.

Liberty Media’s 2020 financial results are illuminating, for the commercial rights holder (CRH) carried by far the largest percentage losses, having gone all-out to ensure that the teams survived the crisis. One wonders whether predecessors CVC Capital Partners would have been similarly generous. Where Liberty in 2019 turned over a sliver over $2bn – itself 10% up on 2018 – revenues tumbled by 45% to $1.145bn last year.

However Liberty’s costs of sales – effectively money disbursed to teams as prizes and bonuses – dropped from $1.4bn (off a $2bn base) to $975m (off a $1.2bn base), a 31% decline, with the difference of 14% shouldered by Liberty. Thus, where the CRH suffered a modest $35m loss in 2019 – understandable given the investments it is making in the sport – for last year that grew to a whopping half billion dollars. Liberty took that on the chin.

However, as a direct result of the reduced circumstances the teams received an average of 14% less than in 2019, which had been a record year in terms of team payments. The question is whether expenses were contained by the same amount or better. If so, happiness; if not, alarm…

By the same token, Formula One Management, the London-based F1 subsidiary responsible for providing support and technical services to the CRH which are in turn charged back to applicable group company, saw its revenues drop from £228m to £171m, a 25% tumble. FOM’s wage bill fell 25% from £60m in 2019 to £45m yet headcount grew from 506 to 529 (5%), demonstrating the effects of furloughs and months of lost working time.

The reduction in events obviously resulted in reduced costs across the board, for teams and F1, as did reductions in numbers of travelling staff, initially capped at 80 per team but progressively relaxed. However, the biggest savings were realised due to F1’s decision to delay introduction of its new technical regulations until 2022. The decision to roll over of 2020’s cars for a year with minimal updates allowed slashed development costs during the crisis.

Notably the teams all signed up to the 2021-2015 Concorde Agreement, suggesting they were comfortable with Liberty’s management of F1. That the sport was able to get through the year without losing a team attests both to its reliance and the effectiveness of its contingency planning.

How, then, did these revenue declines and various saving programmes affect the teams; which teams floated above Covid and which came to close to sinking?

Impressively, the team turned over £355.5m, a 3% decrease over 2019, with the profit of £13.6m being around 7% down on the previous year. Headcount grew from 1,016 to 1,063 (5%) despite the professed pains of cutting back ahead of the budget cap introduced this year. The team’s payroll increased £10m to £93m despite the lockdown – suggesting bonuses being disbursed at executive level.

A note in the financials states that the highest paid director received remuneration of £6.9m, in line with 2019 levels.

Although not a team, Mercedes F1 engine operation Mercedes-Benz High Performance Powertrains provides further pointers to F1’s health. The Brixworth-based company – at arm’s length from the F1 team to which it supplies power units, as it also does to Aston Martin, Williams, and from 2021 McLaren – posted turnover of £200m, around 30% of which was derived from F1 activities and the balance from ‘other’, including Formula E and Daimler projects.

The team operates to a complex business model in that Red Bull Racing is the race team (only) which competes with kit designed and manufactured by Red Bull Technologies. On the one hand RBR has just 59 employees, a figure that remained static year-on-year; on the other it turned over £230m, derived mainly from prize monies, bonuses and sponsor income.

RBT registered revenues of £310m, mainly from sales to RBR, sister team AlphaTauri, income from Red Bull activities such as show cars and demonstrations, and the Aston Martin Valkyrie supercar project. Income was 7% down on 2019’s £337m, as was profit (£55m/£59m). After provisions for RBT ‘other’ activities the purified turnover is around £250m, covered mainly from RBR’s turnover.

As with Mercedes headcount increased from 866 to 934, with the latter complement made up of design (342), racing and production (417) and administration (175), proving for a combined RBR/RBT headcount of 993 – in line with that of arch-rival Mercedes.

At first sight McLaren Racing enjoyed a bumper year, posting revenues of £333m versus £186m for the previous reporting period, a well-nigh 80% increase. Reported profit was £136m versus a loss of £30m, a 400% increase. Closer examination, though, shows that £175m (2019 £7m) of 2020’s revenues was derived from the sale of heritage assets to a sister company, and hence the inflated figures.

Purifying the numbers by removing heritage sales from both years casts a totally different light on McLaren’s performance: turnover drops to £160m versus last year’s purified £178m, a 12% drop which is roughly in line with the average. The reported loss without heritage income amounts to £36m, no change from 2019.

With Racing Point having been registered as a new entity in August 2018 after the Lawrence Stroll syndicate purchased what had been the convoluted mess that had been Force India, the company currently has split financial years – to end-August and end-December – as it consolidates under the Aston Martin banner.

With no performance-related income to report during the first two quarters due to the effects of Covid, any financial reportage is skewed and not directly comparable with other British operations, and will remain so until the team operates to a more usual 1 January-31 December financial year.

That said, at the end of 2020 the team reported a headcount of 479, being 459 in various technical and racing departments and 20 in support functions. This is well up on the 407 of the previous year and points to Aston Martin’s considerable expansion plans.

Indeed, as reported here, the team intends raising a bond through the London Stock Exchange to fund its new technical campus. The prospective shows that the team is 57.4% owned by Lawrence Stroll, with a syndicate in which he is also believed to be a participant holding 37.01%, and management the remainder.

The team formerly known as Renault and various other names before that posted a turnover of £156m (2019 £178m), a 11% drop, with profit plunging from £23m to £8m, a 60% fall. CEO Laurent Rossi stated that overall costs decreased by around 6% due to F1’s reduced activities but that revenue shortfall could not be fully compensated, hence the profit reduction.

That said, given that the team is a wholly owned Renault subsidiary profits are dependent upon the level of support received from the parent company.

The team’s strategic report states that it relies on two unnamed major suppliers, a reference to the technical service and support it receives from Dallara and Ferrari. These supply the hardware as required, with Haas Formula effectively racing the cars and paying race team wages. Various other Haas group companies, mainly US- and Italy-based, cover other costs, so direct comparisons are not relevant save for a few pointers.

Turnover of the British operation was £80m, well down on 2019’s £112m although profit was static at around £8m, as were headcounts at around the 100 mark.

Williams is another team in which year-on-year comparisons are not relevant after the team was de-listed and sold to new owners (BCE LLC, a subsidiary of Dorilton Capital) in August. They have made considerable investments, but the company needs a full reporting year before comparable results are posted.

F1’s inherent rude health was instrumental in enabling the sport to weather the Covid crisis, with Liberty’s commitment to the sport smoothing over the very rough patches. That said, arguably the biggest factor was F1’s decision to defer introduction of its ‘new era’ of car design by a year, freeze development and roll over the 2020 cars for a year with few updates permitted.

One lesson is that the sport does not need new cars every year and should impose some form of regulatory life cycle on major components such as monocoque which would enable teams to stick with their prevailing designs for two or three years, with the option of upgrading within the budget cap if they so wish.

The biggest lesson was, though, that F1 could set aside its internal differences and pull together when the chips were down. F1’s comparatively healthy – given the prevailing crisis financial – numbers attest to that.